BAI Group has a steady involvement in the development of numerous shale gas and transmission projects, along with renewable energy projects (e.g. wind, solar, biogas). Since the proliferation of natural gas production and alternative energy production projects, what effect are they are having on the national level with regard to carbon dioxide emissions? BAI Group researches the answer to this question and analyzes the anticipated growth of these projects moving forward.

The Decline of Carbon Dioxide Emissions

According to a recent report by the U.S. Energy Information Administration (EIA), carbon dioxide emissions have declined in the U.S. by approximately 28 percent since 2005. The EIA report cites that the decline in carbon dioxide production is attributed to a combination of factors, including a general decline in electric power consumption and a mix of less carbon intensive emission electric power generation sources. With regard to power production, a portion of the emission reduction is attributed to the decline in electricity produced by coal during the report’s period. In lieu of coal, natural gas and renewables, which generally yield much less carbon emissions, have been providing an ever-increasing portion of the energy portfolio over the last 13 years.

Decline in development costs for solar and wind-based systems have largely been supporting their growth.  For example, according to the International Renewable Energy Agency, the costs associated with on-shore wind and solar development projects have decreased by 23 and 73 percent, respectively, since 2010. With the progress of energy storage systems, it is likely that integration with wind and solar projects will continue to create a strong demand for these systems moving forward. 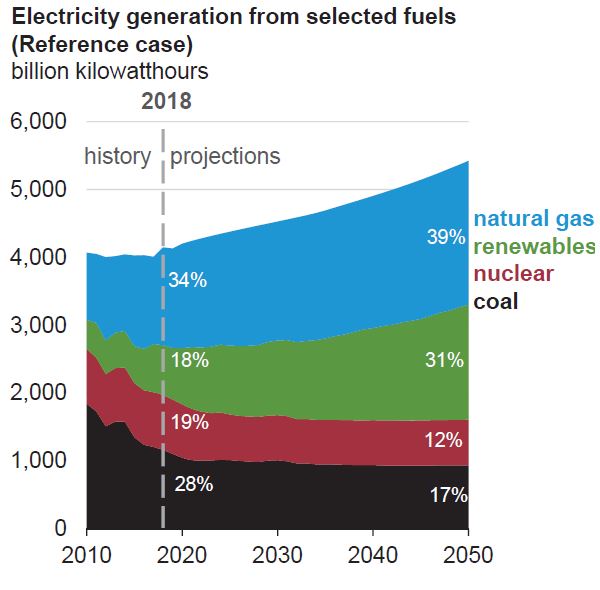 Looking Ahead to the Future

Based on current trends, it seems reasonable to expect that the growth of renewable and natural gas projects will continue to grow well into the middle of this century. BAI Group also expects inevitable improvements in the current technologies, to assist in reducing carbon emissions from natural gas power production projects.

BAI Group is excited to assist the U.S. energy and power industries on their path towards revising power generation and delivery. We remain on the forefront of new developments and are ready to discuss our clients’ needs by exploring the development of their energy projects.